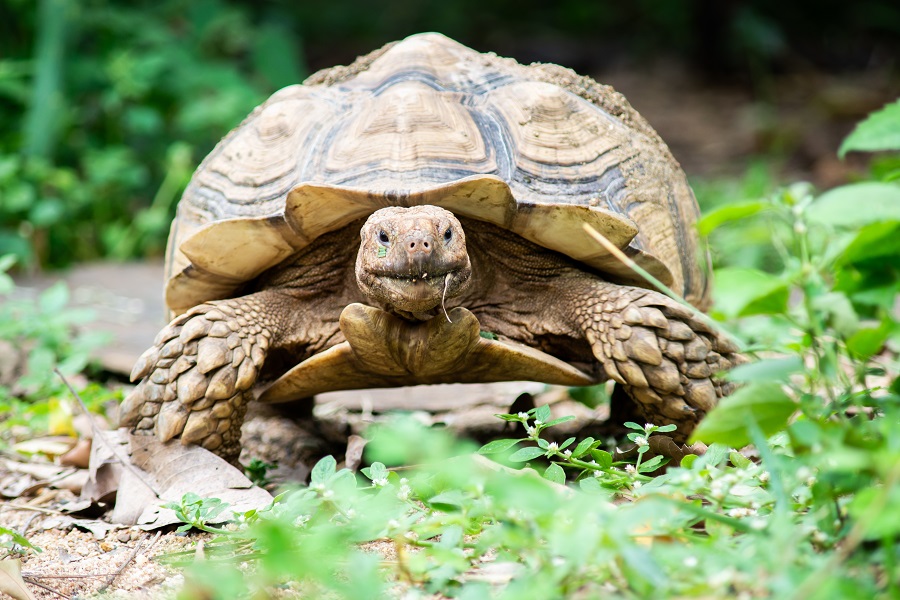 Tortoises of the genus Sulcata are indigenous to the more northern regions of Africa. Their range extends from the southern edge of the Sahara all the way down through the arid countries of Africa, such as Senegal, Mauritania, Mali, Niger, Chad, the Sudan, and Ethiopia, and all the way up through the dry, hot Massaua coast that borders the Red Sea.

Sulcatas bred in captivity or imported from other countries are becoming increasingly common in the pet trade. The carapace length of the sulcata can easily reach 24-30 inches (60-75 cm), and specimens can weigh anywhere from 80-110 pounds. The sulcata is the largest of the African mainland tortoises (36-50 kg). The record-holder was a male who lived in the Giza Zoological Gardens in Egypt. He weighed 232 pounds (105.5 kilograms) and measured 41.6 inches (104 centimeters) over the carapace (Flower, 1925, in Stearns). The Giza Zoological Gardens were the home to the specimen that held the record for the longest time spent in captivity at 54 years.

Sulcatas are native to parts of the Sahel, which is the hottest and driest region in all of Africa. It’s possible that some areas won’t see rain for years. Their skin is resistant to fluid loss so that they can make the most of the available moisture. However, when their skin is exposed to moisture, it may become highly permeable. In order to accomplish this goal, they will excavate pallets or burrows in the ground to gain access to regions that contain higher concentrations of moisture; in the wild, they may spend the hottest part of the day in these types of microhabitats. Burrows can be as shallow as 30 inches deep on average, but some species dig tunnel systems that extend at least 10 feet underground. Sulcatas, much like the majority of other turtles and tortoises that are native to dry areas, are very economical with the water that they use.

When kept in captivity, the environment should be kept consistently hot and dry throughout the year. Sulcatas, on the other hand, do not hibernate like desert tortoises found in California. They are able to withstand some temperatures that are surprisingly low, but they cannot withstand being both cold and wet, nor can they be kept outside in weather that is both cold and damp.

What to feed your sulcata?

Sulcatas require a diet that is high in calcium, low in protein, and high in fiber. Grass is the single most important component of your sulcata’s diet, right behind clean water in terms of importance. They are herbivores, like cows, and they enjoy ambling around aimlessly while nibbling on grass all day long. You should strive to feed them grass that is at least 80 percent of the total diet, with the remaining 20 percent consisting of flowering plants, succulents, and weeds.

During the warmer months, all you need is a pair of scissors and a bucket to go out into your own yard, which has not been treated with any kind of chemical, and cut the grass yourself! The majority of grasses that can be found in yards are safe to eat.

You can switch out the grass in your sulcata for timothy or orchard hay during the winter months if you live in an area that does not support grass growth. Although you can find these hays at most pet stores and large department stores like Wal-Mart, the most cost-effective option is to purchase them in large quantities at a farm supply store. You also have the option of shopping online and having the items delivered to you.

Sulcatas go crazy for the Mazuri Tortoise Diet, which is a dried grass pellet type food. This is yet another great grass option for the colder months. If you want to make these pellets more palatable for younger sulcatas, all you have to do is place them in a dish and give them a light misting of water.

Calcium is an essential nutrient that must be provided in addition to grasses in order to guarantee healthy bone and shell development. In the wild, sulcatas will obtain their calcium by eating plants that are found growing in calcium-rich soil. In this way, they get their calcium. While they are feeding on plant roots, they frequently consume soil particles that are high in calcium. They will also seek out and consume the shells of desert-dwelling snails and bones that have been bleached in order to supplement their diet.

Because they are our pets, the only food they eat is what we provide for them. You are able to give them a powdered supplement; however, it is simple to give them too much of it. They will consume the cuttlefish bones as and when they are required, so it is best to make them readily available to them.

The best environment for young and juvenile sulcatas is an indoor environment with temperature and lighting controls. A terrarium that ranges in size from 10 to 20 gallons can provide a home for one or two hatchlings until they reach a size of approximately 3 inches. After that, they should be relocated to larger quarters on an as-needed basis until they reach the size of a basketball. When they reach this size, they are able to be housed outside in most climates as long as a heated shelter is provided for the night and for the days when the temperature is cooler.

When it comes to providing accommodations for adults, sulcata tortoises present a challenge that is unlike any other. There is neither a correct nor an incorrect way to carry out the task. Each keeper will have a unique set of constraints and resources to work within. Important considerations include safety, dimensions, and the accessibility of shelter.

If you keep young tortoises indoors, you will need to provide them with both a heat source and lighting that encompasses the full spectrum. To create a thermal gradient inside the enclosure, you should make one end of the tank warmer than the other side of the tank. In other words, the temperature should decrease from one end of the tank to the other. This provides the tortoise with a spectrum of temperatures from which it can select one at any given moment. The ideal daytime basking temperature for young animals and juveniles is approximately 90 degrees, while larger animals can tolerate temperatures closer to 100 degrees in their warm spots. In either scenario, the temperature on the side of the cage that is furthest from the source of heat should not go above 80.

Sulcata tortoises absolutely require full spectrum UV lighting in order to thrive as pets. In their natural environment, they are subjected to sunlight that has not been filtered, and it is this sunlight that enables the body to produce vitamin D3, which is in turn required for calcium absorption in the intestines. In captivity, we make use of bulbs that were developed particularly for this function. The majority are in the form of fluorescent tubes, but larger animals housed in larger enclosures would benefit greatly from using new mercury vapor bulbs that provide both heat and light (like Zoo Med’s Powersun).

There are probably as many different points of view on the ideal substrate as there are people who keep tortoises. Nevertheless, there are some that are unquestionably more applicable than others. When housing young sulcatas indoors, it is important to provide a substrate that is not only easy to clean but also free of dust and is to some extent safe even if consumed. No substrate is inherently healthy for an animal to consume, but there are some that are noticeably less hazardous and more likely to be eliminated without incident than others.

There are a variety of options available to you, including orchid bark, cypress mulch, newspaper, and even soil itself. Stay away from anything that is made of synthetic materials (like carpet) that could cause serious harm if nibbled on. When they are young, most species of tortoise, including desert tortoises, need their substrate to have some level of humidity. Sand or bedding that is completely dry should never be used.

These tortoises are native to a region that experiences extreme heat and aridity, and as a result, they are well adapted to a lifestyle that requires very little water. They will obtain the majority of the water they need from the food they consume while they are held captive. It is important to provide a shallow water dish, but you should not anticipate that all sulcatas will drink regularly from a dish that contains standing water. Instead, you should submerge baby tortoises at least twice per week for ten to fifteen minutes in water that is thigh-deep and lukewarm. Doing so almost always encourages people to drink, which will help ensure that adequate levels of hydration are maintained in the body.

Soaking becomes less important as the animals get bigger and as they consume a greater amount of food; however, a source of water should still be provided on a consistent basis for them to drink regularly.

Keeping sulcatas does not present any challenges related to the surrounding humidity. Pyramiding is a common shell deformity seen in fast-growing tortoise species. However, recent research has shown that growing tortoises that have access to a humid shelter (like a burrow in nature) are less likely to show signs of pyramiding. This can be accomplished with something as straightforward as placing a clump of damp moss inside the animal’s preferred den and spraying it with water every few days to keep it just slightly damp.