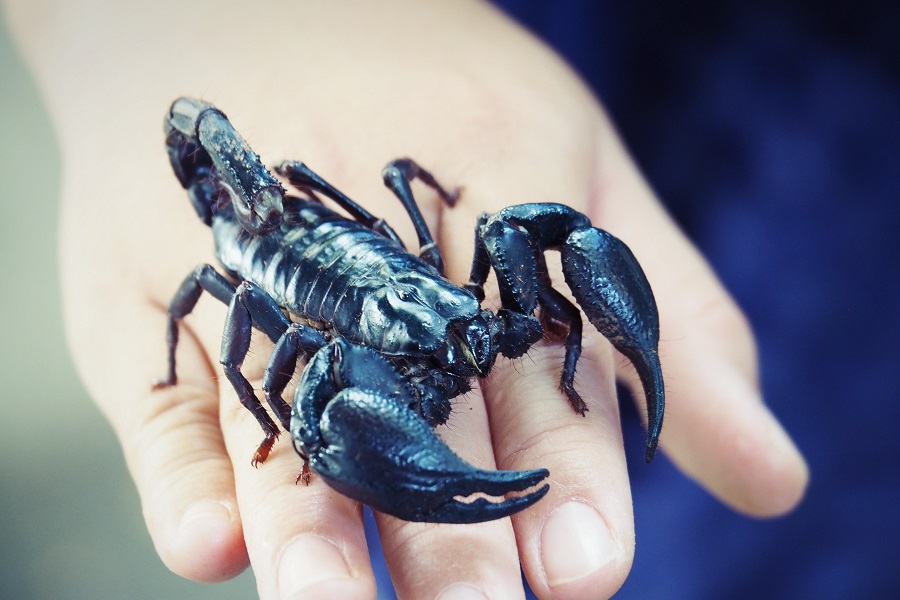 Scorpions are relatively low-maintenance, silent, and clean. When compared to other scorpion species, the most popular pet scorpions aren’t exceptionally deadly. Although some people can experience serious anaphylactic reactions, their stings are comparable to bee stings.

Here are eight types of scorpions that can be kept as pets if you’re looking for a unique animal experience.

The emperor scorpion is the species of scorpion that is most frequently suggested for novices to keep as a pet. This scorpion is rather calm, and most individuals only experience a slight localized reaction to its poison when it stings them. Some claim that this scorpion is less likely to sting you than to try to pinch you with its claws, but usually doesn’t act aggressively unless it feels threatened.

The Malaysian black scorpion is a type of scorpion that lives in the jungle and is rather huge. It is more difficult to get it as a pet than the emperor scorpion. It is also more aggressive than the emperor scorpion, making it unsuitable for people who are just starting out. It is more likely to defend itself using its claws rather than its sting than anything else. Because its venom is relatively harmless and, in most circumstances, only results in localized pain and inflammation, many people opt to keep it as a pet despite the risk.

Even though it is considerably smaller than its more well-known relative, the emperor scorpion, the Tanzanian red-clawed scorpion is a member of the same genus as that species. As a result of its tendency to be more aggressive and likely to sting than the emperor scorpion, it is not advised for individuals who are just beginning their scorpion keeping experience. But its venom is mild like a bee sting. In captivity, red claws have been known to live for up to eight years.

The Javanese jungle scorpion, which is native to the rainforests of Indonesia, has been known to live for up to eight years when kept in captivity. On the other hand, it can be quite territorial and aggressive. The most likely way for these scorpions to defend themselves is with their powerful claws, and they also have stingers that contain a mild to moderately toxic venom. They are one of the few scorpion species that may be kept in groups, but it is possible that some of them would fight with one another.

In the southwestern region of the United States, you can find desert hairy scorpions. When kept as pets, they have a tendency to be shy, but when provoked, they will take on a protective posture. Because their venom is more powerful than that of the emperor scorpion, a sting from one of these scorpions can be rather excruciating; as a result, we do not recommend them for novices. These scorpions need their habitat to be reminiscent of a desert environment, complete with a thin layer of gritty sand and an occasional light misting.

Large-clawed scorpions rarely use their venomous stingers, instead opting to defend themselves with their formidable claws. The majority of patients find their venom to be only moderately painful and not life-threatening. These scorpions can be discovered in the vast deserts of Northern Africa and the Middle East, where they reside in deep tunnels. Because of the prerequisites of having the right amount of soil depth and moisture, recreating that habitat in a controlled setting can be challenging.

The appearance of the Asian forest scorpion is extremely similar to that of the emperor scorpion, albeit the Asian forest scorpion is slightly smaller. It possesses a sting that is analogous to that of a hornet, and it is capable of displaying some degree of hostility and territoriality. However, its claws are the most likely weapon it will use to protect itself. This species has a high degree of adaptability and has been known to survive in captivity for up to eight years.

The emperor scorpion and the dictator scorpion are closely linked to one another. It possesses a body that is incredibly big and a pair of formidable pincers. However, it is more likely to be timid than aggressive toward people, and it will spend the majority of its time hidden inside of a burrow. The dictator scorpion, in contrast to many other species of scorpions, may peacefully cohabit with other members of its species; yet, numerous males may engage in aggressive behavior toward one another.

It is not recommended to keep any of these scorpion species: