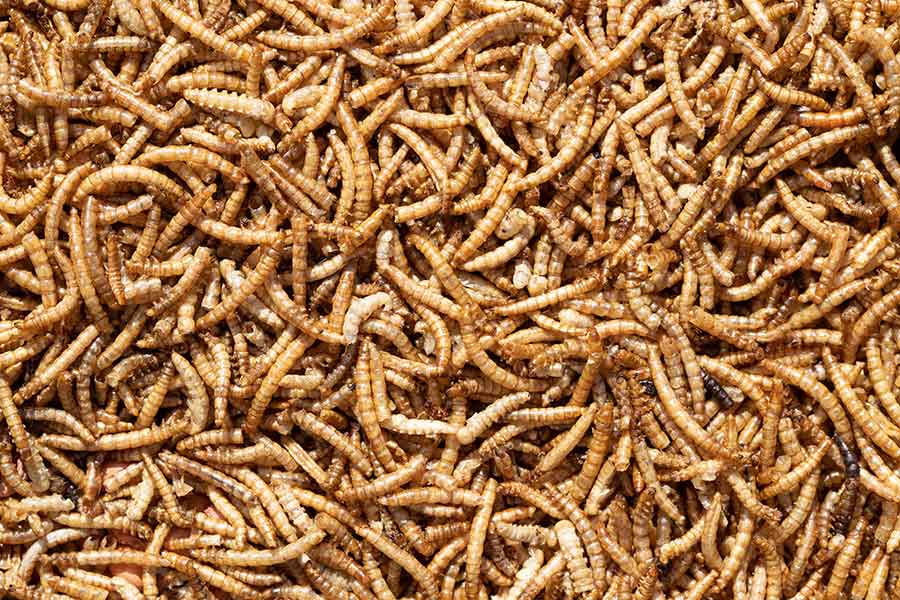 Even though it is very convenient to purchase mealworms at local pet stores or order them online, some reptile keepers, particularly breeders who maintain a large number of animals, like to try their hand at raising their own mealworms. Mealworms are well known in the world of reptile keeping for being a convenient feeder insect to offer to pet lizards. This article will walk you through the fundamentals of raising mealworms on your own, including how to provide them with a sufficient amount of nutrients, how to maintain a clean environment for them, and how to breed your mealworms quickly enough to keep up with the demand of your herps.

Mealworms for your reptiles

Mealworms are a favorite food of many herps, and these animals readily consume them when they find them. However, larger species may sometimes overlook mealworms because of their size. If your pet doesn’t seem interested in the food, you can try switching it up. After feeding your lizard a variety of other insects for a period of time, such as crickets, locusts, soldier fly larvae, or waxworms, you should go back to feeding it mealworms. It is recommended that a reptile’s diet contain a variety of foods; therefore, you might want to consider feeding mealworms one day, then switching to a different kind of insect the next time, and so on, before returning to mealworms. Even if your reptile never gets sick of eating mealworms, you should still follow this recommendation because it’s a good one.

Lizards enjoy mealworms the most, but turtles won’t turn their noses up at them either.

If mealworms are being rejected by the lizard, it is important to verify that they are still alive and moving, as this triggers the feeding response in the reptile. Mealworms can be made to move around more actively in omnivorous animals’ diets by placing them in a shallow dish with some fresh fruit or vegetables. Bearded dragons are one example of an omnivorous animal.

There is a great deal of debate regarding the question of whether or not a live mealworm can chew its way out of an animal’s stomach. There is not much evidence to support the claim that mealworms can escape through a reptile’s body in this manner, causing the animal to die; however, there are those who stand by their claims. Mealworms were used in experiments, and the results demonstrated that although it was possible for them to survive in stomachs for short periods of time if they were eaten whole, they did not attempt to chew through, and it is nearly impossible that they would have the strength to do so, especially while they were being digested.

When whole mealworms are passed in a pet’s droppings, which is also not very common given how thin the exoskeleton of a mealworm is, some keepers may become concerned. However, this does not happen very often. If you believe that your reptile is not digesting mealworms and is therefore not benefiting from them, you may want to consider feeding freshly molted mealworms. These mealworms do not have the exoskeleton that can make it difficult for some animals to digest mealworms. Freshly molted worms have a color that is somewhere between off-white and pale, and this allows you to tell them apart from the rest of your colony.

A large colony can be established in a plastic tub with smooth sides to prevent escapees. For example, the common 66-quart plastic storage bins manufactured and readily available in most places are suitable for this purpose. The bottom of the container should be covered with a four-inch layer of bran, wheat flour, and/or cornmeal. This should serve as both bedding and a food source, but it should not be the only food source. Include some nutritious vegetables in their diet as well. Instead of using the plastic lid that is included with some containers, which does not allow for adequate ventilation within the habitat, I suggest using a Zilla screen top instead. If you don’t do that, it could get too warm, which would encourage the growth of bacteria and mold. Mealworms are most successful when kept at a temperature of about 75 degrees Fahrenheit, which is also the ideal temperature for them to reproduce, lay eggs, and continue their life cycle. If it is necessary to maintain this temperature, an incandescent lamp or heat emitter such as the Zilla Day Blue Light Incandescent Reptile Bulb and a Fixture can be placed on top of the screen top. Temperatures significantly higher than that can be harmful to the worms’ health. Both the Zilla Terrarium Heat & Habitat Controller and Reptile thermometers can be used to get an accurate reading on these factors.

Mealworms have a tendency to breed more quickly in environments with higher humidity. While the humidity in most people’s homes is sufficient for breeding, in drier climates, increasing the humidity in the mealworms’ enclosure by adding a glass of water that is high enough to prevent the worms from climbing into it can help. It is not a good idea to use a water dish that is shallow because any worms that get into the water will probably drown. Reptile hygrometers can be used to get an accurate reading of the humidity.

It is essential to maintain a level of relative cleanliness in the container housing the mealworm colony. Check for dead worms on a regular basis (they will typically turn to a darker brown color when they die), and remove any that you find. Mealworms that have died are rarely eaten when offered to reptiles; therefore, it is not necessary to save them unless you intend to use them as organic matter to supplement the diet of plants.

Mealworm colonies typically do not smell of anything other than their bedding; however, if they are not properly maintained, the accumulation of dead worms and frass can produce an odor that is both bothersome and lingering. After about a month has passed, you should remove the frass (which is waste that can be used in gardens) and old bedding, wash and dry the container, add new bedding, and then replace the insects. In addition, if the container is not maintained properly, it may attract unwanted pests and promote the growth of fungus, mold, or bacteria.

Mealworms spend anywhere from six to eighteen days as pupae after emerging from their eggs, before maturing into darkling beetles, which is the final stage of the mealworm life cycle. Mealworms spend approximately ten weeks as worm larvae when conditions are optimal. The beetles have a lifespan of eight to twelve weeks, after which they expire and must be removed from the bedding before it can be used again. It is possible to feed your reptiles mealworms in any of these stages, including the larvae, pupae, and adult beetles; however, mealworms are the most common form of nutrition for reptiles. It’s also not a good idea to feed the beetles because they’re the ones that are mating and laying eggs, and if you feed too many of them, your colony will fail because there won’t be any new mealworms to keep the population going after it’s depleted of its existing supply of mealworms.

Other than being used as food for pet reptiles, mealworms have a variety of other applications that, depending on the hobbies you partake in, could make maintaining a colony of mealworms more financially feasible for you. One more common application for them is in the making of bird food, particularly for pet softbills (like finches and canaries), as well as for a variety of wild birds. Mealworms are a popular choice among amateur birdwatchers for luring bluebirds to their feeders. Bluebirds don’t typically eat seed, and as a result, they are sometimes hesitant to visit feeders. In addition, they entice a wide range of other common backyard birds, including robins, chickadees, wrens, and a number of other species.