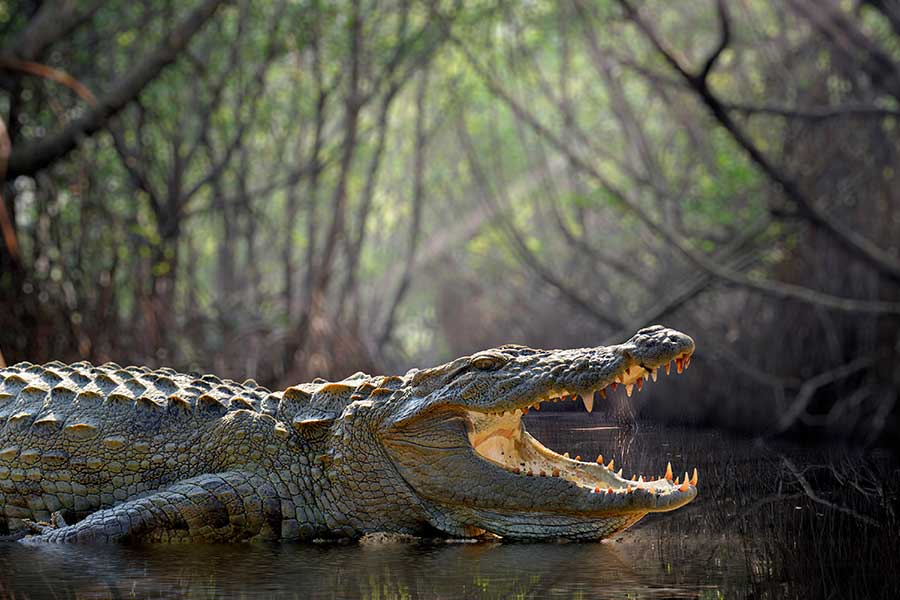 When we think of crocodiles, the first thing that comes to mind are ancient, bloodthirsty predators. This conception of crocodiles is not too far from the reality of the situation. Crocodiles are infamously ruthless carnivores that are renowned for their large size, aggressive nature, and powerful bodies. They have the ability to kill almost every living thing that exists on this planet.

But are these reptiles capable of being domesticated? Can crocodiles be tamed?

Why are crocodiles untameable?

There is evidence that crocodiles have been roaming the earth for at least 200 million years. There are 28 different species of crocodilian, and the vast majority of them lead solitary lifestyles. They have a difficult time cooperating with one another.

Most of the time, we apply the word “tame” to inappropriate situations. To say that an animal has been tamed is to say that it is no longer afraid of humans or poses no threat to them.

There is not a single wild animal that is capable of developing such a relationship with people. Especially not crocodiles. Even though cats and dogs have been domesticated for thousands of years, these animals are still able to retain some of their natural instincts.

Even if a crocodile becomes accustomed to being in the company of humans, we will never be able to say for certain that the animal has been fully tamed. One single unfortunate event can set the stage for multiple fatal outcomes.

Crocodiles have the most powerful bite force compared to other animals throughout the world. Their jaw is capable of producing a force of 3,700 PSI, which is enough to easily fracture bone.

Crocodile attacks are three times more likely to result in fatalities than shark attacks. These formidable beasts should never have been domesticated in the first place.

In addition to the inherent risk of keeping crocodiles, it is against the animal’s nature to be kept in conditions that mimic their natural habitat. It is impossible to recreate their natural environment, and as a result, the vast majority of crocodiles kept in captivity are unhappy and in pain.

Are baby crocodiles untamable too?

Baby crocodiles, in contrast to adult crocodiles, have an endearingly cute appearance. Crocodile hatchlings are only about seven to ten inches long when they first emerge from their eggs.

However, their cuteness and size are only temporary because certain species of crocodiles can grow up to four feet in length in less than a year.

In theory, a crocodile would have an easier time becoming accustomed to being around people if it had been raised in a human environment from the time it was a young child. In spite of this, even the most “tamed” crocodiles still retain their instincts of the wild and have biological differences from domesticated animals.

The fact that we are providing a crocodile with food and treating it like a pet is not sufficient on its own. It is never a good idea to try to tame a crocodile because they will always have a desire to hunt and instincts that drive them to be predators.

Can crocodiles be friendly?

Crocodiles can’t possibly be friendly, that’s not possible. People frequently have the misconception that having a crocodile is similar to having a friendly dog or cat. But this is completely incorrect; the reptiles cannot learn to love their owners or interact socially with them in any way.

The explanation for this is straightforward: crocodiles are incapable of experiencing these kinds of feelings, and therefore they cannot interact with people.

Nevertheless, the world is full of unexpected occurrences and deviations from the norm. Pocho, the crocodile, was an exceptional animal in every way. After being shot in the head, this reptile had a strange connection with a man from Costa Rica, who rescued it and brought it back to life.

Following the rescue, a man continued to return to the location where the crocodile had been living. They gradually developed a relationship that eventually became public knowledge. Pocho and the person who saved him became “friends.” They were always in close proximity to one another, whether they were swimming, playing, or even sleeping.

This peculiar relationship attracted a lot of attention from vacationers, researchers, and people who study animal behavior. Pocho passed away when he was 50 years old, following a friendship that spanned 20 years.

Having a pet crocodile

The practice of keeping a crocodile as a pet is outlawed in the majority of states. However, despite the fact that you may be able to legally keep a crocodile as a pet in the state in which you currently reside, we strongly advise against doing so. A fully grown crocodile is comparable to having your own personal dinosaur.

These reptiles consume a HUGE amount of food. And if they don’t get as much as they would like, they might act belligerently as a result.

Having a pet crocodile is not a good idea for a number of reasons, including the fact that it can be quite pricey to maintain. And remember, in order to maintain the health of your pet crocodile, you will need to provide it with the proper food and water.

Crocodiles that are kept in captivity should not be fed solely chicken or beef. In addition to that, their diet ought to include fish and insects. In the wild, these reptiles will also consume stones, which aids in the digestion process of the animal.

However, you shouldn’t give stones to a crocodile as part of its diet; instead, you should leave the stone within the crocodile’s territory so that it can consume it if it becomes necessary.

When it comes to young crocodiles, they shouldn’t consume food any more frequently than three times a week. In addition, their daily food consumption shouldn’t exceed five percent of their total body weight.

In addition to being a costly endeavor, keeping a crocodile as a pet is a challenging and risky endeavor. Once more, we strongly advise you to give this potent reptile some serious consideration before buying it.

Crocodiles are one of the most formidable animals that have ever roamed the surface of the Earth. The process of attempting to tame a crocodile is both risky and challenging. Domestication of crocodiles will never be possible in its entirety. Crocodiles are able to be merely tamed to behave in a particular way by being conditioned to do so through either fear or starvation.