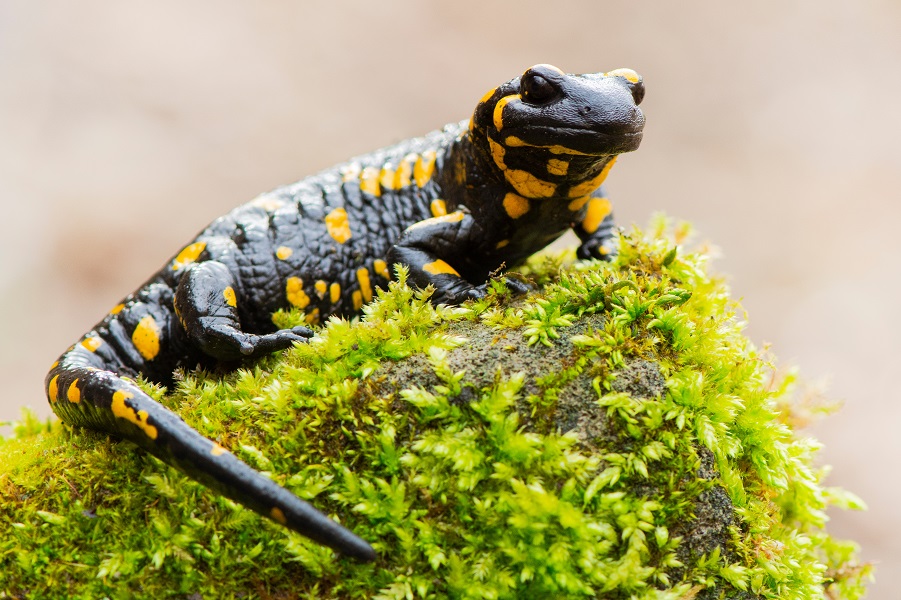 A salamander is not always the same thing as a newt. Confused? Adult salamanders are members of the scientific order Salamandridae, which refers to the entire group of amphibians that retain their tails into adulthood. This includes amphibians such as newts and sirens, which are more commonly known by their common names. The appearance of most salamanders can be compared to that of a lizard and a frog. They resemble frogs in that their skin is oily and smooth, and they have long tails like lizards. When referring to salamanders that spend the majority of each year living on land, the term “newt” is frequently used. The term “siren” is commonly used to refer to species of salamanders that have lungs in addition to their gills but never mature beyond the larval stage. A salamander may also be referred to as an olm, axolotl, spring lizard, water dog, mud puppy, hellbender, triton, or Congo eel. All of these names refer to the same animal. Whew!

The majority of salamanders are under 6 inches (15 centimeters) in length, and only a few species can grow to be longer than that. The siren is the only species of salamander that has only two legs, while the other species develop four legs as adults and have fleshy toes at the end of each foot. Because of their aquatic lifestyle, the feet of certain species, like the paddle-tail newt, are completely webbed but have very short toes. There is no webbing on the feet of salamanders like the tiger salamander because these salamanders prefer to dig and spend less time in water.

The front legs of a salamander mature much more quickly than the legs in the back of the animal. (The reverse is true for frogs and toads; the length of their hind legs increases more rapidly than that of their front legs.) Because salamanders have such short legs on all four of their limbs, their bellies drag along the ground. Because of its remarkable ability to regrow lost limbs, the axolotl, which is a species of salamander native to Mexico and can be pronounced AX oh la tul, has become an extremely important subject of research in recent years.

The sirens are the only creatures in the group that do not have legs. They don’t even have forelegs in the back! Their long, powerful tails are flattened out to help them swim like fish, with the tail fluttering from side to side as they swim. Sirens are a type of sea creature.

The various salamanders that make up this order have each come up with their own unique method of breathing. They are able to breathe underwater because sirens maintain their gills throughout their entire lives. Others, like the tiger salamander, do not retain their gills as they age but instead develop lungs in order to take in oxygen from the air. However, the majority of adult salamanders, such as the arboreal salamander and the California slender salamander, do not possess lungs or gills. They are often referred to as lungless salamanders due to the fact that they breathe through their skin as well as the thin membranes in their mouth and throat.

Skin on newts is typically dry and warty, whereas the skin of salamanders is smooth and slippery. However, there are, without a doubt, some notable exceptions! In spite of this, salamanders and newts require a constant supply of moisture to their skin in order to maintain a healthy appearance and feel. They could perish if the temperature and humidity levels get too high.

The salamander’s habitat and diet

In order to maintain their body temperature and maintain their moisture levels, salamanders that live on land can be found in shady, forest-like environments. They spend the majority of their time hiding from the heat of the sun in the shade provided by rocks and logs, high in the branches of trees, or in underground tunnels that they have dug themselves. Before making their way back to the land, some of them look for a body of water where they can mate and lay their eggs. Some animals, such as sirens, olms, and axolotls, remain aquatic throughout their entire lives.

There are a total of sixteen salamanders that live in caves. They have very pale skin, eyes that are greatly diminished in size, and have adapted to living in total darkness in underground pools of water by developing this adaptation.

The habitat requirements of the Kaiser’s spotted newt are not those of a typical amphibian. The Zagros Mountains in western Iran are home to this critically endangered species of newt, which is also known as the emperor spotted newt or the Iranian harlequin newt. It lives in streams and pools that are surrounded by dry scrubland and only receive water for three or four months out of the year. You can find it. Not exactly the damp, shady spot where one would anticipate discovering a newt! Late in the month of March or early in April, when it first starts to rain and the streams and pools begin to fill up, Kaiser’s newts emerge from their burrows to eat heartily and then search for a mate. Following this period of increased activity, summer will arrive, and they will retreat underground, burrowing into the sandy soil, and entering a state of torpor in which their heart rate and breathing will slow, and they will not consume any food.

Although four months of activity per year might not appear to be very much, the Kaiser’s newt is very good at making the most of the time it has available to it.

Are you going to eat something that is unpleasant and something that might hirt you? Almost certainly not! Salamanders have developed a variety of unique defense mechanisms that allow them to avoid becoming a predator’s next meal. The skin of the vast majority of salamanders, including the red-spotted newt, is brightly colored and toxic. The vibrant color alerts potential predators that the newt should not be consumed for food. There are glands on the back of the neck or on the tail of many species of salamander. These glands are capable of producing a liquid that is either poisonous or has a foul taste. Some species of salamander are even able to cast off their tails in the midst of a fight and then quickly regrow them. The ribs of the ribbed newt are pointed, like needles. It is able to tense its muscles and cause the tips of its ribs to pierce through its skin and into its adversary, thereby imparting a valuable life lesson. The ensantina, a California native, stands high on its legs and waves its tail to scare away danger.

All salamanders are carnivores, but they are seldom in a hurry to catch their meals. Because they move more slowly than other meat eaters, salamanders tend to eat slow-moving, soft-bodied creatures such as earthworms, slugs, and snails. The larger species of salamanders have been known to consume fish, crayfish, and even rodents like mice and shrews. They might approach their target slowly, and then make a quick grab with their sharp teeth. Or they might hide and wait for a tasty meal to pass close enough to snatch. Several salamanders can flick out their tongues to catch food as it goes by.

Most salamanders hatch from eggs. Female salamanders that spend no time on land can produce up to 450 eggs, which is more than their counterparts that do spend some time on land. A clutch of seven to thirty eggs is laid by the California newt on top of underwater plants or exposed roots. A membrane that looks like gel and is toxic provides protection for the eggs. Lungless salamanders, like the spiny salamander, are devoted parents that share the responsibility of guarding their eggs. They do this by wrapping their bodies around the eggs and turning them over at regular intervals. This shields the eggs from being eaten by predators as well as infections caused by fungi. Up to 400 eggs can be laid by a single female newt, and some of them are protected by their mothers by having individual leaves wrapped around them as they are laid. Efts are the name given to salamanders when they are in the larval stage of their development.

The life cycles of various salamander species are also distinct from one another. Some of them reproduce on land, where they also lay their eggs and raise their young, while others, like certain species of newts, reproduce and lay their eggs in water. When the eggs hatch, the larvae spend their formative years in the water, and only then make their way onto land as mature adults. Still others, like the giant salamander and the hellbender, live out their entire life cycles in the water. This includes both the egg and larval stages. The axolotl lives out its entire aquatic life in the larval stage, never developing beyond the features of its larval stage, a condition known as neoteny. Lungless salamanders have eggs that hatch directly into small salamanders, skipping the larval stage entirely.

The Chinese giant salamander is in grave danger because humans illegally hunt it for food, and traditional Chinese medicine makes use of its body parts. As a result, its population is rapidly declining.

The habitats of newts and salamanders, which are found in wetlands, continue to be destroyed and polluted by humans. Keep in mind that in order to survive, these amphibians require water. The destruction of their ponds, the use of pesticides, and the rerouting of water to meet human demands have all contributed to the decline of many salamander populations; in fact, more than 70 species are currently listed as being in an endangered or critically endangered status. All of us need to work together to protect the remaining habitats for these one-of-a-kind animals and to create new gardens and parks for them.