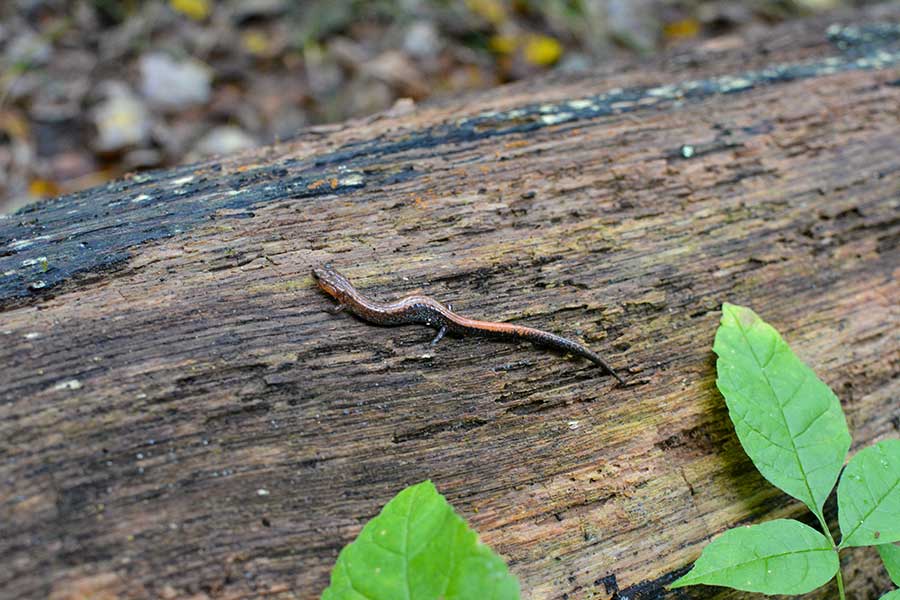 In a typical forest found in the eastern United States, you can find salamanders just about anywhere. On a single acre of forest, there may be thousands of salamanders searching for food among the leaf litter, under logs, and in the creeks. Because of this, they play a hugely important role in the process of cycling nutrients through forest ecosystems. In fact, they are often the largest group of species in terms of biomass of any vertebrate found in such a forest. Unfortunately, several species of salamanders, such as the Shenandoah salamander, are experiencing a precipitous population decline and are now protected under the Endangered Species Act.

There are three mountain ridges in Shenandoah National Park that are home to the Shenandoah salamander, which is a species of salamander that lives only on land and is quite small. Individuals are capable of existing in two distinct color phases (one with a narrow red or yellow stripe on a brownish body, the other black with brass-colored flecks). Because it is a woodland salamander, the Shenandoah salamander does not have lungs; rather, it breathes air through the surface of its skin. Because of this, its skin needs to be kept moist at all times; as a result, the animal is primarily nocturnal, meaning that it hunts at night while hiding during the day and reducing its activity levels when there is a lack of water. It requires very specific habitat conditions, such as cool and moist mountain forests at an elevation of at least 2,600 feet, with an understory that contains talus or other rocky debris. Despite the fact that the salamander has always been confined to these high-elevation mountains in Virginia, it is coming under increasing danger as a result of climate change, the spread of invasive species, pollution, and activities carried out by humans.

The Shenandoah salamander will typically spend the day tucked away in cracks and crevices in rocks, logs, or other rocks. It is nocturnal and hunts for mites, springtails, beetles, flies, and various other kinds of insects, particularly when the weather is wet. Although it has not been observed, mating is presumed to take place in a manner that is comparable to that of other woodland salamanders. The eggs are fertilized on the inside before going through their full development process. There is no aquatic larval stage, in contrast to the majority of other salamanders. Between the months of May and August, clusters of anywhere from four to seventeen eggs each are laid on logs or moss.

The Shenandoah salamander lives on talus slopes that face north and are situated at elevations greater than 3,000 feet (915m). However, in comparison to other Plethodon species, it is better able to survive in drier environments. It can only be found in areas where the moisture conditions are optimal.

The actual historic range of the Shenandoah salamander is unknown because it was only discovered relatively recently and only occupies a small area. It is hypothesized that the population of this species was never very large because it occupied such a specialized ecological niche.

The Shenadoah salamander can still be found today on the talus slopes of three mountains in the counties of Madison and Page in the state of Virginia. Shenandoah National Park encompasses all three of these locations entirely within its borders. There is not currently any estimate of the population.

In 1994, the Fish and Wildlife Service published a Recovery Plan for the Shenandoah salamander they were responsible for protecting. Within the boundaries of Shenandoah National Park, every one of its known vital habitats is safeguarded. Ongoing damage to the habitat is however caused by invasive species of pest insects that feed on tree species that are dominant in the area. Research should be conducted into the biology of the Shenandoah salamander, as well as its habitat requirements and beneficial management practices. The populations of the Shenandoah salamander should also be surveyed and monitored more thoroughly (particularly the control of insect damage).