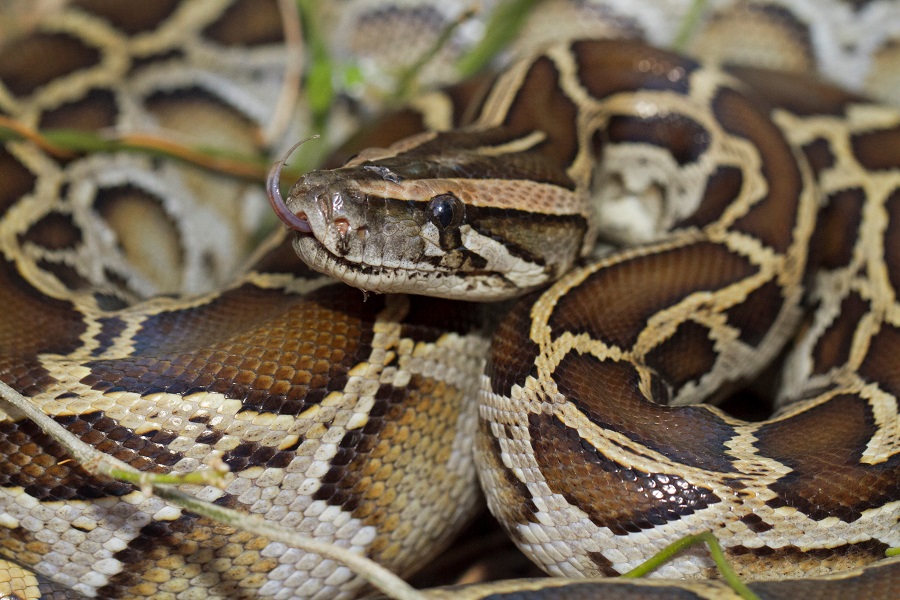 The Burmese Python is not only one of the largest snakes in the world, but it also has the ability to call your home its permanent abode. The question is whether or not they should and whether or not they are an appropriate snake for novice keepers.

When it comes to interacting with humans, this giant snake is typically quite docile and won’t pose much of a threat. Even though he is on the larger side, he is a very popular choice for a pet and is not overly expensive. In most cases, he has a color pattern that is similar to that of a brown leopard; however, he might also have the appearance of an albino.

The natural home of these snakes is in southeast Asia; however, they have become an invasive species in southern Florida because the climate there is warm enough to support their growth.

Burmese Python Kept As A Pet In A Tank

Individual Burmese Python hatchlings can be housed in plastic containers with a capacity of 20 gallons each. Because of how quickly they will develop, they will need to be transferred to larger enclosures as they get older.

A python that is 9 months old will require a container that is at least 3 feet long, 1.5 feet wide, and 1.5 feet high.

Pythons that have reached adulthood require a habitat that is roughly 5 feet by 5 feet by 10 feet in size.

Both enclosures should have at least one side of their tank made of glass, and it is a good idea to secure the top of the enclosures with a solid barrier so that the animals cannot escape.

Adult snakes will not use soaking dishes nearly as often as babies do, so you should only get one for your baby snakes. Your python should have access to clean drinking water at all times, regardless of whether or not it is being soaked. Additionally, make sure to provide logs and branches for your snake so that it has places to hide from predators.

The ideal environment for Burmese Pythons is a tank with temperatures ranging from 80 to 86 degrees Fahrenheit and a humidity level of approximately 60 percent. A total of 14 hours of light and 10 hours of darkness should be provided in the tank. Adult snakes should be warmed using ceramic or infrared bulbs, while younger snakes can benefit from having their tanks heated from the bottom. In addition to that, they require a warm, sunny spot that is approximately 90 degrees Fahrenheit.

When it comes to constructing the ideal habitat, the best substrates you can use are natural soil and synthetic grass. Both substrates are difficult to maintain; consequently, when looking at the matter from the perspective of the caretaker’s convenience, many opt for paper towels or newspaper because it is so much simpler to replace them.

One of the advantages of paper towels is that they show signs of bacterial growth much more readily than grass or soil do, and they are also much simpler to clean (especially in a large tank).

Because Burmese Pythons are susceptible to bacterial respiratory infections, maintaining a routine with their care is critical to ensuring that they remain healthy. They require an environment that is free of dirt and germs.

Many researchers are interested in learning more about the diet and metabolism of this particular snake.

They have the ability to expand their jaws, which allows them to consume prey that is even larger than the snake itself. They have been documented as eating both small and large mammals, and they have even demonstrated the ability to suffocate and consume whole deer and alligators.

In the wild, Burmese Pythons will frequently consume deer, monitor lizards, large rodents, and birds that make their homes on the ground.

They are a type of predator that prefers to wait and watch rather than actively pursue prey. They do not actively search for their prey but rather wait for it to come to them. He will not consume any food except for one meal once every few weeks or even months.

It would be beneficial for captive animals to replicate the eating behavior seen in their natural environment. Your Burmese python ought to eat once every two weeks (if not more infrequently), and the width of the prey item ought to be roughly equivalent to that of the animal itself:

If they are babies, they’d eat pinky mice.

Juveniles ought to be gorging themselves on a number of mice, large rats, or young rabbits.

Adults are able to consume an entire chicken or a large rabbit.

Do not be alarmed if, after your Burmese Python has finished eating, he appears to have significantly grown in size all of a sudden. The size of their small intestine, liver, heart, and pancreas, as well as their kidneys, all significantly increase after they have eaten a meal.