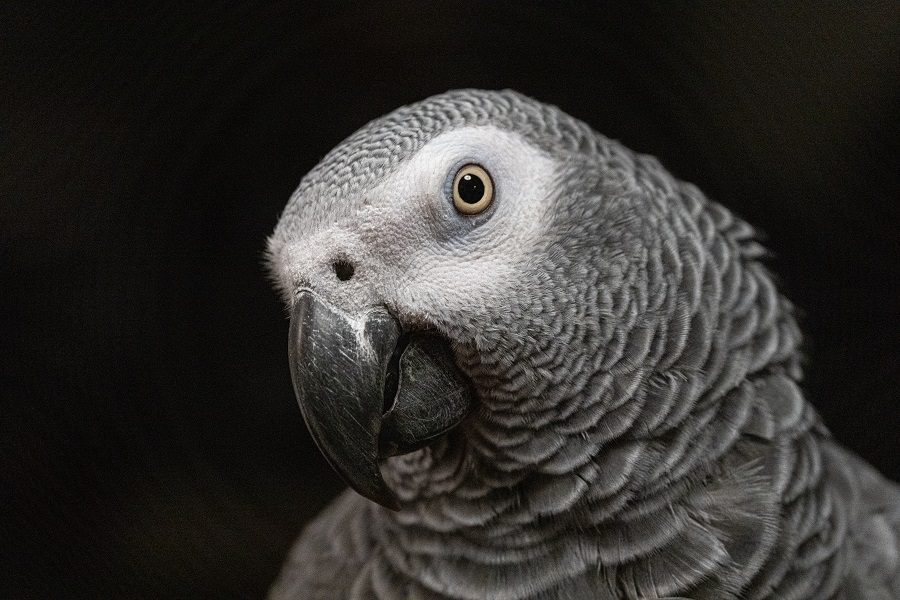 The African Grey parrot has quite the reputation among people who are passionate about birds because it is widely considered to be among the most skilled talking and mimicking birds in the animal kingdom. The African Grey parrot is one of the most well-known species of birds, so it is well-liked not only by people who keep birds but also by people who are not particularly knowledgeable about birds. Due to the fact that records of this parrot date back to biblical times, it is considered to be one of the oldest psittacine species that has been kept by humans. This parrot stays at the top of its game thanks to the combination of its understated beauty and its intelligent, no-nonsense attitude.

At first glance, the African Grey appears to be a medium-sized bird that is dusty-looking gray, almost pigeon-like. However, further investigation reveals that the African Grey has a bright red tail, intelligent orange eyes, and a stunning scalloped pattern to its plumage.

Within their range is West and Central Africa, African Grey parrots can be found in a variety of habitats, including savannas, coastal mangroves, woodland, and edges of forest clearings. Although it is commonly known as the Congo African Grey, the larger of the two subspecies of the African Grey bird, this particular bird actually has a natural range that extends much further across Africa, including parts of the southeastern Ivory Coast, Kenya, and Tanzania. The Timneh African Grey can only be found in a relatively small area that stretches from the southern tip of Guinea to the westernmost point of the Ivory Coast. In the wild, the majority of their food consists of palm nuts, seeds, fruits, and various kinds of leafy vegetation.

Are African Grey a good choice of pet and how much does it cost?

The African Grey Parrot is a stunning and highly intelligent species of parrot that would be a wonderful addition to any family that has a complete understanding of the capabilities of these birds and provides them with an environment that is stimulating and interactive. It takes a significant amount of love, time, and patience to build a relationship.

The personalities of Congo Grey Parrots (CAGs) and Timneh African Parrots (TAGs) are very similar in many respects; however, it is said that Timnehs start talking sooner than Congos do and are generally considered to be less anxious when confronted with unfamiliar people and novel situations. Timnehs tend to be more sociable than Congo Greys, which tend to form stronger bonds with a single individual. There are distinct individual differences in personality, a large part of which may be determined by the amount of early and ongoing socialization an African Grey received while still in its formative stages of development.

Because of their high intelligence, these parrots have a tendency to become easily bored, and prolonged periods of inactivity can quickly lead to behavioral issues such as picking at their feathers. Because bored parrots have a propensity to chew things, having a diligent owner who is also consistent with their training is essential for this energetic bird.

People who have previous experience keeping pet birds and are familiar with the ongoing care requirements for birds are the best candidates for ownership of these intelligent birds.

If you fulfill his or her needs, you will have a lifelong friend – as the lifespan of an African Grey Parrot is up to 60 years. Having a true friend for life is a significant commitment; however, if you are a true parrot lover, you will appreciate the opportunity to do so.

The exceptional talking and intellectual capacities of Grey parrots have brought them a lot of attention in recent years.

Not only does this bird have a propensity for accumulating a large vocabulary, but African Greys also demonstrate an aptitude for understanding the meaning of words and phrases. This is one of the reasons why the African Grey is frequently considered to be the “poster bird” for parrot intelligence.

Toys that test their intelligence, such as foraging and puzzle toys, should be provided in ample amounts for African Grey parrots. Foraging is an activity that is best done with Lafeber Company’s Nutri-Berries. This complete food comes in the form of a berry and is made up of a variety of grains, seeds, and other types of nutrients. African Grey parrots are encouraged to hold, nibble, and even play with the Nutri-Berries because the grains and seeds are formed into the shape of berries, and the majority of the grains and seeds are left whole. This is meant to simulate the hunting behavior of African Greys in their natural environment.

Placing one corner of the cage against a wall, as opposed to placing the cage in the middle of a room, is a better option for putting African Greys at ease because they appear to be especially affected by the stress and commotion in their environment.

Because African Grey parrots are more likely to suffer from a vitamin A or beta-carotene deficiency, it is beneficial for them to consume vegetables that are rich in beta-carotene. Some examples of such vegetables include cooked sweet potatoes and fresh kale. A lack of vitamin D is another cause for concern, particularly for senior pets who eat poorly. Preventing vitamin and mineral deficiencies in an African Grey can be accomplished by providing them with a pelleted, well-balanced diet like Nutri-Berries as their primary source of nutrition. When it comes to their diet, Greys that eat pellets typically do not require any additional vitamin supplements to be added to their food.

African Greys are a lifetime commitment, owning one is no joke. However, this experience is one of the most fulfilling things a human could experience in a lifetime.